I really hope this isn’t bad. Gucci Mane’s music is usually pretty bad, but I feel like it’s gotten worse ever since he was incarcerated. A lot of his music is fucking awful, but I like trap music. I know it’s not good music, but I like it for some reason. He usually has at least 1 good song that I really like on every project. Hopefully there’s more than one this time. There are no production credits for most of this album.

I’m cold. This beat is fucking crazy. Why does Young Thug always pronounce that hard R in “ThuggeR?” His verse was pretty terrible. His flow wasn’t bad tho. Oh shit. This is just a Young Thug song… I thought it was a Gucci Mane song featuring Young Thug at first… That’s disappointing. Is this a Brick Squad album? Or are there just a lot of Brick Squad features? Wow. All of these songs have features. Well… This song actually isn’t that bad. The beat is dope af. The hook is alright. Young Thug’s verse was horrible, but his flow wasn’t that bad. It was kinda funny when he talked about the gay rumors. “You think I’m gay, I’ma send ya to meet your maker” I actually enjoyed it. It’s entertainment, not art. 4/5 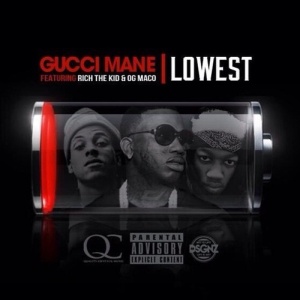 I fuck with OG Maco. His Breathe EP was actually good. Not good for trap music, but just good. He was actually talking about police brutality and real shit like that. It wasn’t trap music. It was dope. Rich The Kid on the other hand is pretty fuckin’ bad. His flow is just all over the place. His voice can be kind of annoying too. This beat is alright. Sounds like any other generic trap beat. Gucci had an average verse (average for him; bad for anyone else). Rich The Kid’s verse was terrible. The hook’s pretty good. OG Maco’s verse was actually kinda wack too… This song is alright. There are just enough features to keep it slightly interesting. Kinda wish the features did a better job tho… 3/5

Wait a minute… Didn’t I already review this shit? Yeah, it was on that East Atlanta Santa album. Why is this on here? It’s not like there wouldn’t’ve been enough music if this wasn’t here. Whatever, I really don’t give a shit. Kinda sucks if you bought both albums, but I doubt anyone would buy two Gucci Mane projects. Wow. I actually like this song a lot more than I used to. The beat isn’t bad and I actually kinda like the hook now. Gucci’s flow was actually pretty good. I prolly didn’t like this song when I was listening to East Atlanta Santa because I was getting tired of Gucci Mane. It was track 8 on that album and it’s pretty early in this album. Raury still had the best verse tho… I actually really like this song. I fuck with this. This is dope. 4/5

I guess Flocka & Guwop worked out they problems and are friends again. That’s good ’cause the shit Gucci was makin’ without him wasn’t as good. Flocka on the other hand got dope af. He actually tried rapping for real. I Can’t Rap, Vol. 1 was a genuinely good (or… maybe just not bad) project. I may end up reviewing Vol. 2 someday. This beat is fucking crazy. The hook isn’t bad. Gucci’s flow is the same as it always is, but it sounds great over this beat. He does rhyme a few words with theyselves tho… Flocka’s verse wasn’t that bad. He did say some fucked up shit tho. “Brick Squad, new Wu-Tang.” I’m sorry, but that’s just unforgivable. Lemme guess, Young Thug is the new ODB right? Fuck you. I did like the song tho… 4/5

This song is by Flocka and it has three uncredited features. Flocka only does the hook. The hook’s average. The first verse is definitely by Young Thug. He had a cool flow I guess, but his bars were just fucking ridiculous. I don’t know who that is on the second verse. Is that PeeWee Longway? It might be. I don’t know who else that could be. The voice sounds way too deep to be him tho… Yeah that’s definitely not PeeWee Longway… Whatever, it doesn’t matter because his verse is pretty wack. It’s average I guess. I don’t know who that is on the last verse. It might be OG Boo Dirty. It prolly is. The beat is pretty generic. This isn’t very good. It’s kind of a boring song. Not really feelin’ this shit. 2/5

This song is just about how Brick Squad will fucking kill you. It’s basically a drill song. Guwop’s verse was cool. Flocka’s on the hook. The beat’s pretty boring. What the fuck…? The second verse is missing… I’m serious. First you hear Gucci’s verse, then the hook from Flocka, then nothing but the instrumental. There’s a huge gap where nobody says anything, and then the hook comes on again. That’s where Sya Ari was supposed to rap I guess. He’s not actually on the track tho… Flocka has a short verse at the end. What the fuck? That’s weird as hell. I’m not really sad about that or anything because I have no idea who tf Sya Ari is and I don’t really care. Kinda wish they would’ve cut that part out tho… I guess they thought we wouldn’t notice that there’s a whole fucking verse missing from the song. I’m not really feelin’ this track. Even if the second verse wasn’t missing, this would still be a pretty boring track. Not feelin’ it. 2/5

What the hell? This is a weird song… It’s a trap beat, but it sounds really quiet for some reason. I can’t describe it. The intro is kinda weird too. I like this beat. AH SHIT! When that shit drops in the middle of Gucci’s verse my nigga! That shit… I like that shit. Young Dolph sounds awesome when he comes in too. His flow is dope. This is dope af. I like this shit. This is weird as hell. 5/5

This beat is alright. The hook is fucking terrible. It’s autotuned and the mixing is terrible. Sounds like it was recorded in a pool. That’s an exaggeration, but it’s still pretty bad. Not feelin’ the first verse from the Migos. I think one of them is on the hook, but I can’t tell the difference between them ignorant ass niggas voices. That might actually be Gucci, but I don’t think it is. PeeWee Longway has a terrible 8 bar verse. It might be less than 8 bars. It might be 6. Gucci doesn’t have a verse. This is a Migos song featuring PeeWee Longway. This shit is wack af. 1/5

AH SHIT THIS BEAT IS FUCKIN’ CRAZY! Wish I knew who produced this. Lmao. I don’t know who the fuck Fein is, but it’s pretty hard to take him seriously when he’s in the background yellin’ “Wo-WOP!” Scooter did his thing on the first verse. Fein actually sounds good on this track. The hook is alright. It just lasts a little too long. Oh this is a Young Scooter song. There ain’t no Gucci verse. It’s a dope song. I fuck with this. 4/5

This beat is dope af. Unfortunately, MPA Duke ruins this hook. His flow is terrible and the hook is drowned in autotune. Not feelin’ this shit. 2/5

Oh fuck no. I don’t know who the fuck MPA Wicced is, but he sounds fucking awful. What the fuck is this shit? What is he doing? His voice sounds awful. He sounds like he’s half awake. His flow is awful. He’s out of breath too. He’s doing the most half assed singing I’ve ever heard. It’s even worse than when Drake does it. This is fucking garbage. This shit wack af. 1/5

This beat is alright. Nothing special. Gucci got an average flow. This hook from Quavo is so fucking stupid that it’s funny. This is hilarious. This shit ain’t for me, but it’s fun to laugh at. Definitely gonna listen to this when I’m with the homies just to laugh. 3/5

This shit was pretty bad, but it was actually a lot better than the last Gucci Mane project I reviewed. You can definitely tell that they’re running out of unreleased vocals from Guwop. That’s why there are so many features and tracks without him. It feels more like a Brick Squad compilation than a Gucci Mane album. If you are really into trap music, there’s no reason for you to not like this. If you’re like me and you’re only into some of it, I would still give it a listen, but don’t expect much. This won’t change your opinion on Gucci Mane at all. Mainly because he’s barely on this project. I bet there are more guest verses than Guwop verses on this album. I feel like I kinda wasted my time reviewing this project…