EP Review | Wiz Khalifa & Ty$ – Talk About It In The Morning

I really don’t know how to feel about this project. Wiz Khalifa’s last project, Blacc Hollywood, was fucking terrible, but he still had a few decent songs on there. I think Ty$ is an alright singer, but he’s really not that impressive compared to a lot of others. I’m really not into the whole DJ Mustard R&B sound. Paranoid was cool I guess, but that shit got old quick. Wiz Khalifa is a wack rapper. He can have a dope flow occasionally, but usually he just pisses me off. I also think that he might be one of the dumbest rappers in Hip Hop, outside of trap music. Just look at him. He looks like a dumb hippy. I feel like he smoked his brain away. He fell off. Hard. I am expecting to get at least one good song off this project tho. Hopefully he doesn’t disappoint me. Thank God this is an EP. I really don’t feel like listening to a full length album from Wiz Khalifa for a very long time. Also, this may be an unpopular opinion, but that cover art is ugly af. It’s so bad. I know that it’s supposed to be like the early 2000s Cash Money shit, but that shit was ugly af too. The music may have been enjoyable, but the art looks so fucking cheap. It looks like something a struggle rapper threw together in MS Paint for they debut mixtape. When the shit was first revealed people left comments on HNHH saying shit like, “Throwback… this cover art is raw” First of all, who the fuck calls shit “raw?” That word should only be used to describe food. There were some reasonable comments on there tho. “Shit looks like the cover for the very first mixtape ever to be released on datpiff. Aside from that it looks like trash way too much going on in it.” “Bling covers were trash back then. And they’re still trash now. And looking at the comments I can see y’all niggas got no taste in what’s good.” I agree with both of these people.

This beat is weird af. I don’t know if I like it. It sounds kinda… shitty. Yeah… It kinda sucks. Wiz Khalifa is rappin’ about some chick that’s always mad at him for some reason. It sounds like he’s talkin’ about his parents yellin’ at him. He’s talkin’ about how she doesn’t like him staying out late at night with his friends. I don’t know about this. Wiz’s flow is alright I guess. Ty actually did his thing on the hook. I fuck with the hook. This sounds like it was written about Amber Rose. “Not to mention I was the most faithful nigga in existence (not true…) / But when it goes down that’s how they flip shit” I don’t really like this shit. Ty$ did his thing on the hook, but the beat and Wiz just didn’t do it for me. Not feelin’ it. 2/5

This beat is dope. It’s real smooth. This is the kind of production I was expecting from Pilot Talk III. Why? …I …I actually have no idea… This is an average Wiz Khalifa song. It’s just like the shit from Rolling Papers. He’s talking about partying and doing drugs with some chick. Except he’s talking to me like I’m the chick. I’m… okay with that. I know I’m not really supposed to take it that way. Artists do that all the time. The hook is boring af. Someone’s singin’ on it. I can’t tell whether it’s Wiz or Ty$. It honestly sounds more like Wiz Khalifa. It’s pretty unimpressive. I really hope that isn’t Ty$. I wish it was tho. It’s over. That felt really short, but it’s 3 minutes long. I think it’s because it’s a really slow song. It takes forever for anything to happen. It’s kind of a boring track, but I really don’t think it’s that bad. The beat was good, Wiz’s lyrics were average and the hook was mediocre at best. It’s alright. 3/5

That transition was really smooth. I thought it was the same track at first. Ty$ is definitely on this hook. It’s alright. The singing isn’t bad, but it’s pretty boring. This is like a Drake song. Everything on this EP kinda sounds like a Drake song. This is a really slow song. Wiz Khalifa is yelling. I think. It sounds kinda loud. Some of these lyrics are corny af. “Park my ride where your heart’s at, that’s home” This shit is… soft. This is so soft. This is Drake music. It sounds like Drake music that he would make for a party. I’ve never heard a PARTYNEXTDOOR song, but this is what I assume his music sounds like. Really slow and sappy and atmospheric. But boring. This is boring as hell. I’m not feelin’ this. 2/5 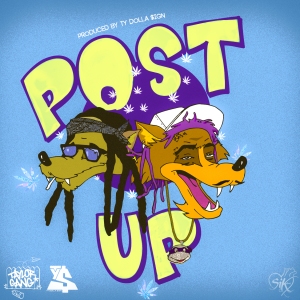 This beat is dope. Ty$ did his thing on the first verse. It’s an average song about Ty$ and his friends fucking some chick who has a boyfriend. This is cool I guess. I feel like the beat never dropped. It feels really skeletal. I said it was dope at first, but I was kinda expecting it to drop at some point. This is boring too. It’s way less boring than the last track, but it still just feels kind of empty. It’s alright I guess. 3/5

This beat is great. It’s just as atmospheric as the other ones, but it doesn’t feel empty. This is just a song about how Wiz is living the life. Ty$ isn’t on the hook this time. It’s some guy named The BMMB. He does a pretty good job. Wiz did a good job too. He wasn’t amazing or anything, but there’s only so much you can say with a topic like this. Ty$ had a dope bridge. The beat actually sounds like it fits the topic too. I fuck with this. This is dope af. 5/5

That was actually… kinda wack. I only really liked the last song. All of these songs are just really fucking boring. They all have a really atmospheric and moody sound. Like I said, they sound like Drake songs. Wiz is talking about partying & doing drugs, which doesn’t really make sense when all of these instrumentals are so calm and make you feel hollow inside. The first track has a really different and experimental sound, but it just isn’t very pleasant to hear. Wiz’s rapping is pretty basic and unimpressive throughout the whole project. His flow is very average and these topics are honestly pretty uninteresting, mostly because it feels like Wiz has already made a million songs about these same things. It really feels like a shortened more atmospheric version of Rolling Papers with featured vocals from Ty$. Also, the terrible cover doesn’t fit this project at all. When I see a cover like that, I assume that I am going to hear bangin’ beats and ignorant/stereotypical songs about wasting money and fuckin’ bitches at cookouts. What I got were atmospheric songs from an incredibly nonthreatening pothead who is mad at his spouse and likes to take drugs with girls. These tracks aren’t all terrible, but for the most part it’s a very average project. It’s alright.