This mixtape was released on February 5th this year. Remember the preamble to my Slime Season 3 review? Everything I said in that review applies to this mixtape as well. I’m expecting this shit to be wack, but it’s only 9 tracks long, so I figured that I’d get it the hell outta the way before Jeffery comes out. Aside from that, I don’t have shit to say yet. I’m just glad it’s less than 10 tracks long. Hopefully it’s better than Slime Season 2. 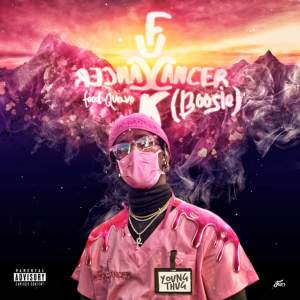 This song was created in response to Lil Boosie’s announcement that he’d been diagnosed with kidney cancer. It’s starting now. Wow. This hook is actually pretty dope. The melody is really catchy. I really like the vibrating bass too. The beat is dope. The first verse was wack. Of course this song has absolutely nothing to do with cancer or Lil Boosie aside from the opening lines. “Ay, fuck cancer / Shout out to Boosie.” That’s literally the only part of the song where Boosie & cancer are mentioned. The second verse was wack. Quavo’s verse wasn’t good. I actually enjoyed this song tho. If you pretend the lyrics aren’t absolutely ridiculous, it’s a pretty entertaining song. My only huge problem with this song is the title. It seems like he’s using cancer and Boosie’s name to get more publicity for this single. I enjoyed the song sonically tho. It’s entertaining to me. I fuck with this song. It’s dope. The music video was pretty dumb. 4/5

This hook isn’t as catchy as that of the previous song, but I still think it’s pretty good sonically. Hmm… It seems like Young Thug actually kinda improved between this project and Slime Season 2. This project is miles ahead of Slime Season 2 sonically. I won’t get ahead of myself tho; I’m only two tracks in. Woah, what the fuck? This first verse is fucking horrible. Is that Ralo? Jesus fucking Christ… He sounds fucking God awful on this shit. You know how Young Thug pretty much jacked his style from Lil Wayne? It sounds like Ralo jacked his style from Young Thug. His verse is fucking dogshit. I’m definitely not a fan of Lil Durk, but compared to Ralo he sounds great. His verse was still wack tho. Lil Durk cannot rap. Well, neither can Young Thug, but Young Thug’s music is way more fun to listen to and talk about. Trouble’s verse was wack. He definitely had the best verse so far tho. Young Thug’s verse was horrible. Jesus, dude. This song is fucking awful. I mean, I liked the hook and the production, but these verses are just disastrous. Nah. I’m not feelin’ this shit. This is wack. 2/5

Wikipedia has the feature listed as “Lil Duke,” but I’m pretty sure it’s MPA Duke, who was featured on The Barter VI. This beat is pretty dope. The hook’s cool. Only sonically tho. The lyrics are obviously stupid as fuck. “Pussy clean; ain’t no germs in it.” The first verse was wack. The second verse was really bad too. This isn’t a good song. I kinda enjoyed the hook at first, but it got old pretty quickly. The beat was dope tho. I definitely liked the production. But nah. This shit isn’t good. This is average at best. 3/5

This song is about a deceased rapper named Keith Troup. He apparently passed away in December. The song’s starting now. Oh no… Uuuhhhhh… Nah. I don’t think I’m gonna like this. The beat’s dope af. The hook isn’t tho. Wooow. This really has nothing to do with Keith Troup. The first few lines on the intro were about him, but as soon as the hook came on Young Thug just reverted to his usual subject matter. “My briefs, they high fashion / She naked; I walk through the door.” The first verse was wack. This is just… I don’t even know what to say. This is really disrespectful. I mean, I’ve never heard of this Keith Troup guy until now, but it seems pretty fucked up for Young Thug to just be talking about how he “just fucked some twins.” Nah. I can’t fuck with this song. I didn’t like anything about this song aside from the production. This shit is wack. 2/5

I’m not feelin’ this hook. The beat’s dope tho. Oh my fucking God… “I can fuck a bitch on a bus like she Rosa Parks.” Dude, fuck Young Thug, seriously. The first verse is awful. Lil Durk’s verse was fucking terrible. Nah. The song just ended. Nah. The beat was good. Everything else about this song is trash. This is probably the wackest song on the whole mixtape so far. I can’t fuck with this bullshit. This song is fucking terrible. It’s wack af. 1/5

I think I’ve heard this song before. I know I liked it, but I don’t really remember exactly why. It’s starting now. Oh FUCCCCKKKKK. This beat is insane. This hook is stupid as fuck, but I kinda like it. It has enough of Young Thug’s weirdness to be interesting and stand out from the average Trap song, but he doesn’t go overboard with it, so it’s not super obnoxious. I like it. I just listened to the whole song. It’s not good. I like it tho. The verses are terrible. I’d probably love this song if Young Thug was only on the hook. I think T.I. would be good on the verses. Young Thug just can’t rap. He’s good on a hook, but pretty much everything else he does is terrible. I can enjoy this song, but it would be WAY better if there was a more competent MC rapping the verses. It’s entertaining enough for me tho. Metro Boomin’ really put his ass in this beat. I still think London On Tha Track is a better producer, but this beat was crazy. I fuck with this song. This is dope to me. 4/5

This beat is dope af. The hook is pretty terrible. Okay, maybe I was exaggerating a little bit when I said this beat was “dope af.” Actually, I was exaggerating a lot. This beat is really simplistic. I honestly don’t think it’s that far above average. This first verse from Young Thug is terrible. It does seem like his bars are becoming more coherent than they used to be tho. I don’t know who this Solo Lucci guy is, but his verse was fuckin’ wack. Offset’s verse was bad too. There are people on the Genius page for this song saying that he killed, but his verse was awful. Yeah, it was the best verse on the song, but that’s really not saying much. It was still wack. I’m really not feelin’ this song. The beat is boring as hell, and the hook is wack. It’s just a slew of weak flows and cringe-inducing bars. This shit is wack af to me. 1/5

Woah… This beat is actually really cool. I wish a good rapper was spitting over it. I’m not feelin’ this hook. Huh. This Young Butta guy actually had a pretty good verse. I mean, the lyrics weren’t good, but his flow was pretty dope. He easily had the best verse on this whole mixtape so far, and I doubt that’s gonna change. Young Thug’s verse was absolutely terrible. Fuck no. This song is really bad. The only reason I’m not giving it a 1 is because the beat was kinda cool, and Young Butta actually seemed like he was trying, unlike every other rapper on this mixtape. The shit is still wack tho. 2/5

Dora & Dolly are apparently Young Thug’s sisters. Dora’s on the first verse. Struggle bars. Nothing but struggle bars. “Got lil Dolly on the side of me / We finna aim at your fuckin’ teeth / If you ain’t ‘bout it then you fuckin’ weak / Do what you do; don’t fuck with me.” Her verse was terrible. Dolly’s verse was pretty bad too, but it was only 8 bars. I don’t even really like this beat that much. Actually, never mind. This beat is pretty dope. Young Thug’s verse was fucking awful. This isn’t a good song at all. The beat’s dope. That’s the only positive thing I can say about this track. This is wack. 2/5

This mixtape was really bad. It was way more fun to listen to than Slime Season 2 tho. First of all, it really seems like Young Thug stepped his hooks up. Well… Actually, never mind. It seemed like the hooks were better at first, but the they just got worse and worse as the tape went on. Young Thug was way more coherent on this tape than he’d ever been before. The production was pretty hit or miss. Some of the beats were really dope, but some of them were just boring as hell. The best thing about this tape is it’s length tho. Only 9 tracks. It’s super wack, but it thankfully doesn’t last too long. Well, I guess 9 tracks IS too long. It’s a huge improvement over the first few Slime Season tapes tho. Anyway, this shit is really wack. I can definitely see some improvement, but it’s very slight. Hopefully it’ll be more clear on Jeffery.