This EP was released on September 22nd. Apparently the title is supposed to be a reference to Martha Stewart. I don’t know. Young Thug takes inspiration from a lot of unexpected sources. I guess that’s one thing I can admire about him. Well, I don’t even know if “admire” is the right word. It’s definitely interesting tho. I thought Young Martha was supposed to be the name that Thug & Carnage went by as a duo, but I don’t think that’s the case. I think this is gonna be a decent project. I’m obviously not the biggest fan of Young Thug, but I think he’s definitely improved a lot as an artist ever since he first blew up with Stoner & Danny Glover. Also, this project is only 4 tracks, so it can’t be that bad. There’s not a lot of room for error. I haven’t heard that much of Carnage’s work, but I think the few beats I’m familiar with are pretty good, so I’m optimistic about this. Obviously every track is produced by Carnage. 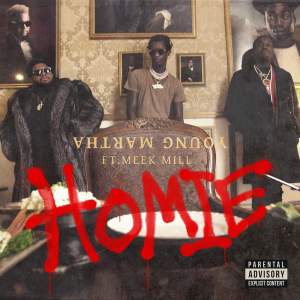 This beat sounds kinda familiar. The organ makes it sound like if someone turned an old cathedral into a traphouse. Young Thug’s using a really wild vocal delivery. It’s kinda reminiscent to that of his hook on Guwop Home by Gucci Mane. It’s like listening to Fat Albert rap. I was gonna say that he sounded like the Cookie Monster, but I think Fat Albert is a much more apt comparison. It sounds nothing like Young Thug honestly. If someone told me there was an uncredited feature on this track I’d probably believe them. Actually, someone could’ve told me it was actually Carnage rapping and I probably would’ve believed it. Gotdamn. This is actually hard as fuck. He’s rapping his ass off.

Put that fuckboy on the newspaper / In the sea with some tons strapped to his ankles / Fuck nigga, try me at any angle / I’ma shoot him and turn him into an angel.

That first verse was actually kinda dope. Obviously there are aspects of it that leave me scratching my head, like the way he repeats the line about turning someone to an angel three times, but it’s a relatively solid verse. The beat’s really dope. Meek’s verse was fine. It felt kinda short. It wasn’t bad tho. It’s just a typical Meek Mill verse. If you’ve ever heard him rap ever, then you already know exactly what this verse sounded like. This is a pretty good track. I’m not really blown away by any facet of this song, but I can’t say I didn’t enjoy it. This is dope.

Oh. Damn. This beat is REALLY fuckin’ dope. Gotdamn. They fucked this beat. Gotdamn. This might actually end up being the most positive Young Thug review I’ve ever written because I’m actually really enjoying this so far. This is even better than the first track.

Everybody got tigers, so I wanna go get a liger / I’m so different from these niggas; I won’t be like ’em.

Ha. Nice. Fuck, man. This is actually REALLY fucking good. This is a quintessential Young Thug song. It’s everything I like about his music all in one track. The beat is fantastic, his melodic delivery is very catchy & eccentric, and he’s rapping with a lot of charisma. This is a really short project, so I’m hoping he’ll be able to put together a full project that maintains this level of quality at some point in the near future. Carnage put his ASS in this beat too. The horns that come in towards the end of the first verse sound so fucking good. I love this track. This shit is dope af.

This beat wasn’t really that impressive to me at first, but when the bass comes in it sounds pretty fuckin’ great. The hook is kind of annoying. It also contains some of the most incoherent bars I’ve ever heard from Young Thug. It’s literal gibberish. I actually really like the way his melodic delivery sounds on the first verse. This is one of those rare occasions in which Young Thug is more entertaining on his actual verse than he is on the hook. The repetitive hook is definitely this song’s kryptonite. It doesn’t completely ruin it, but I could’ve done without it. The actual verses are surprisingly great in comparison. Sonically at least… I like this one, but it’s definitely the weakest song so far. It’s good tho. 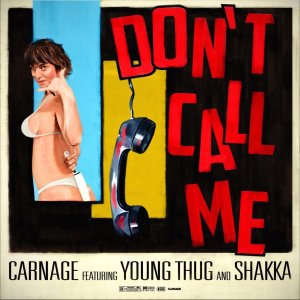 I’m not familiar with this Shakka guy. Apparently he’s a British singer. Not really sure how he ended up coming into contact with Young Thug. Maybe they met through Carnage. It’s starting now. Ehhh… I’m not crazy about the vocals on the intro from Young Thug. Shakka sounds pretty good tho. This is a straight up R&B track. Shakka’s singing in a really high register, and it’s pretty fuckin’ dope. I’m not in love with the production, but it’s not bad. Just not really for me. It sounds like there’s a very, VERY slight Dancehall influence. Young Thug’s verse was cool. Eh. Nah. This really isn’t a bad song, but it’s just not for me. I definitely think it’ll resonate with a mainstream, more Pop-oriented audience. It’s just not my cup of tea. I don’t think it’s bad tho. It’s a decent track. I just won’t ever be listening to it again intentionally.

This is a good EP. It’s easily the best Young Thug project I’ve ever heard. Carnage & Young Thug really bring out the best in each other. Hopefully they continue to work together in the future. I honestly wouldn’t mind a full album from both of them. There’s not really much to break down as far as the overall project goes. It’s only 4 tracks, and none of them are bad. Obviously if you’ve never enjoyed a Young Thug song this isn’t the project for you, but I think they did a great job of bringing out each other’s strengths & expanding upon them. I know Carnage does a lot of EDM shit, so I’m glad he stuck to more of a Trap influence on this project, save for the outro song, which is really just a remix of an older Shakka song. I enjoyed all the original material here tho. Honestly, this is like listening to a regular Young Thug album, except all the forgettable songs are excised. Normally when I listen to a Young Thug album, I’ve gotta sift through about 10 to 15 unbearable excuses for “songs,” and I’m lucky if I can find at least 2 enjoyable tracks. Needless to say, this was a far less painful experience. It’s dope.

Watch the video below for more thoughts on this project