This album was released on June 7th this year. Honestly, I really wasn’t expecting this project to be very good personally. Casey Veggies is one of those rappers who isn’t really trash at all, but he does very little to excite me. He’s like a more tolerable version of Curren$y. He rarely has anything interesting to say, but every now and then he’ll choose a fantastic beat and spit with a relatively good flow. The first project I ever heard from him was that collaborative mixtape with Rockie Fresh, Fresh Veggies. To this day, that’s still the only Casey Veggies project that I actually like. I think it’s really good, but that’s mainly because of the stellar production. I always meant to check out that Life Changes mixtape that he dropped earlier that year, but I didn’t actually end up listening to it until a few weeks ago. It’s not good. I don’t think it’s bad though. It’s just okay. That’s my favorite solo project from him, which is kinda sad I guess. I’ve heard everything he’s dropped aside from those Customized Greatly mixtapes. I also never heard that Bum Shit mixtape that he did with that Rich Hil guy. His Sleeping in Class and Live & Grow albums are both pretty mediocre to me, so that’s the main reason I wasn’t expecting much from this new project. I was hoping that I’d at least get a few entertaining songs out of it though.

My predictions pretty much ended up being completely right. I do not like this album. There were four songs that I enjoyed though, so I’ll talk about those before explaining why I don’t care for the other tracks. I think the album got off to a decent start. The first song, Dream$, is pretty solid to me. The production is really nice, and I like Casey’s flow on the first verse. The rapping is pretty uninteresting lyrically, but that’s to be expected from Casey. It isn’t particularly bad. I’d actually say this is one of the more interesting songs on the album when it comes to the lyrics. He goes into more of his history as an artist. Apparently he used to be in touch with Jay-Z, which is actually surprising to me. I don’t know what Jay saw in Casey, but I won’t question it. It’s not like Jay hasn’t made some questionable decisions in the past. The autotuned background vocals during the hook kinda threw me off at first, but they’re not bad. I actually kinda like them. He mentions the movie Dope in the second verse, which came out in 2015. I didn’t realize that his single, The Boy, was on the soundtrack for that movie. I never really cared for that song, but the production from Hit-Boy is fire. Anyway, the song isn’t really that great lyrically, but I like Casey’s flow, and the production from Julien Earle was nice to me. It’s a pretty good track. The next song, Awarded, is slightly better to me though.

This was the only single I’d heard prior to listening to the full album. The production is really what makes the song enjoyable for me. I also think Casey’s flow is kinda nice on the first verse. The autotuned hook is nothing special, but it serves its purpose well enough I suppose. The second verse didn’t really do anything for me. I like the song sonically, but that’s pretty much it. The production was nice, and I like his flow. Nothing else really stands out. I think it’s a cool song overall though. I fuck with it. So yeah, I like the first two songs on the album. The only other songs I enjoyed were the final two songs on the album. The penultimate track, Mirage, ended up being my favorite song on the project. 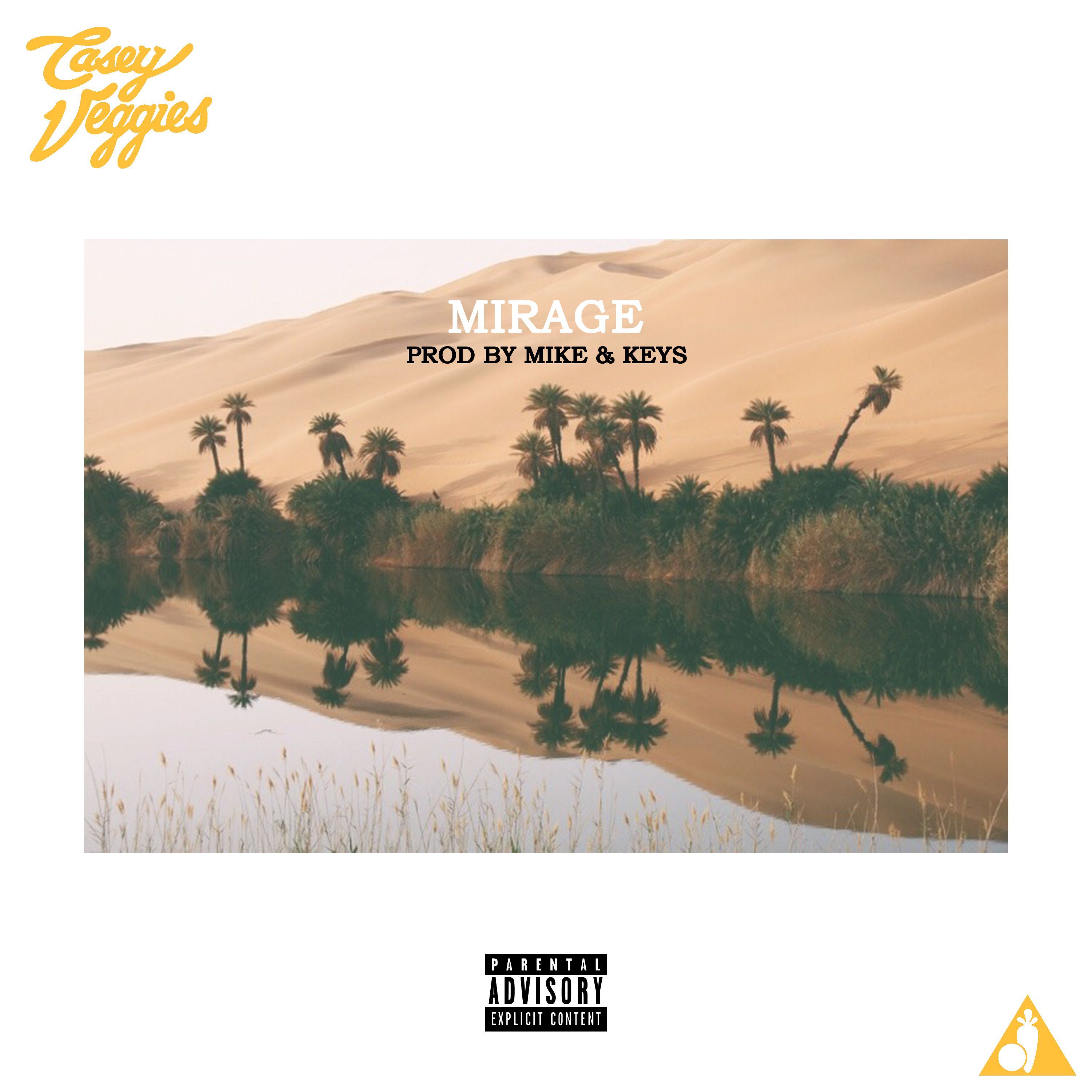 This is easily the best song on the album in terms of production. Mike & Keys did a really nice job with this track. It doesn’t have that generic Bay Area sound that a lot of the other songs have. I think the first verse on this song is actually pretty nice too. In terms of the actual rapping from Casey himself, I think this is probably his best performance on the album. I like it quite a bit. The production is great, the verses are cool, and even the hook is solid. It’s a dope track. The following track, Take It Slow, has another nice beat. Once again, the actual rapping from Casey Veggies is relatively interesting. Don’t get me wrong; it’s not super impressive lyricism, but it’s far more intriguing than nearly every other song on the album. The vocals from BJ the Chicago Kid are really great too, which shouldn’t be a surprise to anyone. It’s a dope song. I think most of the other songs on the album are tolerable, but they just don’t really have any replay value for me personally. Track 3, The Ceiling, has some pretty nice production.

I even think the hook is alright. It just lasts a lot longer than it needs to. I don’t know if it’s just my headphones, but the mixing on this track actually sounds kinda shitty to me. The first verse from Casey is really short, but his flow is cool. The second verse did absolutely nothing for me. Overall, I think it’s a decent song. It’s just kinda boring to me. The following track, Stop Playin’, is a lot worse to me.

I think the production is nice, but the most annoying thing about this song is that the vocals from Casey Veggies are panned to the left for no apparent reason. I have no idea what the fuck that’s about. At first I assumed it would just be for the intro, but no. Throughout the entire song Casey’s vocals are panned to the left. It’s annoying as shit. Even the vocals on the hook are panned to the left. The song features a verse from Dom Kennedy who I’ve never been a fan of. Guess what though… Even his vocals are panned to the left, albeit to a lesser extent. I mean, I guess it’s not that big of a deal since the song wouldn’t have been very good anyway, but it still irritated me. The actual rapping from Casey did nothing for me. Same goes for Dom. It’s a super boring song. Nothing about it really stands out in an especially terrible way, but I’d never listen to it again. It’s really mediocre to me. The following song, I Came Up, is a relatively decent track to me. The Bay Area style production from Iamsu! actually sounded pretty nice to me at first even though I generally don’t care for that kind of Hip Hop. I think the first verse from Casey is alright, and the hook from Bino Rideaux is decent too. The second verse from YG isn’t very good, but I can tolerate it. Unfortunately, the final verse from E-40 ended up disappointing me. He didn’t impress me at all. I actually think his flow sounds kind of awkward at some points. Even the production starts getting kind of old after a couple minutes. The song is decent I guess, but I’d never listen to it again. The following track, Shake Somethin’, is the only song on the album that I actually think is legitimately bad.

The production is actually kinda cool to me. My issue is with the vocals. The autotuned hook from Kalan.FrFr sucks ass. For some reason, Casey decided to utilize autotune for both of his verses, which makes him sound very similar to Kalan.FrFr. It sounds insultingly generic and dull. Literally the only good thing about the song is the beat. It’s easily the worst track on the album. I actually think it’s pretty terrible. Candy is another pretty generic song. The production is very flat, and Casey’s rapping does absolutely nothing for me. It’s just a super bland song. The writing is very simplistic, the content is uninteresting, and Casey’s flow is boring. The hook sucks too. There’s a featured verse from The Game, who unsurprisingly has the best verse on the whole album. He really saves the song from being wack. It’s still very mediocre though. I’m never listening to it again. The only other song that I haven’t mentioned yet is No Favors, which is produced by SAP. It’s actually an okay song. I think the production is pretty solid. Unfortunately the hook isn’t really anything special, but it’s not particularly bad. Nothing about the song really stands out at all. It’s just a really uninteresting track. I think it’s okay, but, once again, I’d never listen to it intentionally. ¯\_(ツ)_/¯

This is an okay album I guess. Again, nothing about it really stands out as being especially wack. It’s just painfully uninteresting. I like four of these tracks, but I don’t love any of them. I will say that this is probably Casey Veggies’ best studio album, but that’s actually pretty sad when you think about it. He’s just another one of those super average West Coast rappers that doesn’t bring anything unique to the table. He’s the kind of artist I’d mention alongside guys like Dom Kennedy, Domo Genesis, Nipsey Hussle, Mac Miller, Curren$y, etc. They’re all just painfully bland artists who bore me to tears. This style of Hip Hop just doesn’t appeal to me at all. I guess I’m glad I checked it out because I did get four good songs out of it, but I really can’t say you’re missing out if you decide to skip this one. At this point, I think the only Casey Veggies-related content I could ever be excited about would be a sequel to Fresh Veggies. I think I saw him & Rockie teasing it on Twitter a few months ago. As a matter of fact, I actually think they dropped a single a couple months back, but it ended up being kinda lame. That’s unfortunate. This project here is fine, but I’m probably gonna completely forget about it in the next couple days. It’s decent though.