This mixtape was released on August 30th this year. As you can see from the title and cover art, it’s inspired by the monumentally popular K-Pop group, BTS. I wasn’t exactly sure what this tape was gonna consist of, so I had no expectations. Well, I don’t know. I guess I kinda thought it’d just be a collection of remixes of BTS songs, but I was honestly hoping that wouldn’t be the case. My sister’s a BTS stan so I’ve been subjected to their music on multiple car rides before, and it’s rough. You know what’s kinda funny though? My sister played one track by them that actually featured Nicki Minaj, and her verse was easily the wackest part of the song. It was so bad. I wouldn’t expect a BTS & Nicki Minaj collab to be enjoyable for me anyway though. I guess that’s because I don’t even like them when they’re making music separately, so together they’re twice as bad. Anyway, I actually think this project was taken off streaming services—including Bandcamp—because I guess it caught a copyright strike. That’s unfortunate. The only way I was even able to get ahold of this project was by downloading it from Datpiff. It’s likely to be taken down from Datpiff as well, so if you’re interested in listening to it I’d download it as soon as possible. Anyway, every track is produced by Rifti Beats. After listening to the project, I actually wasn’t sure if these were remixes of BTS songs or not, but I guess it’s probably because I’m not that familiar with their work. I like five of the seven tracks on this tape; as always, I’ll discuss the ones I like before getting to the ones I don’t care for later. The project begins with Home, which is a pretty cool intro. 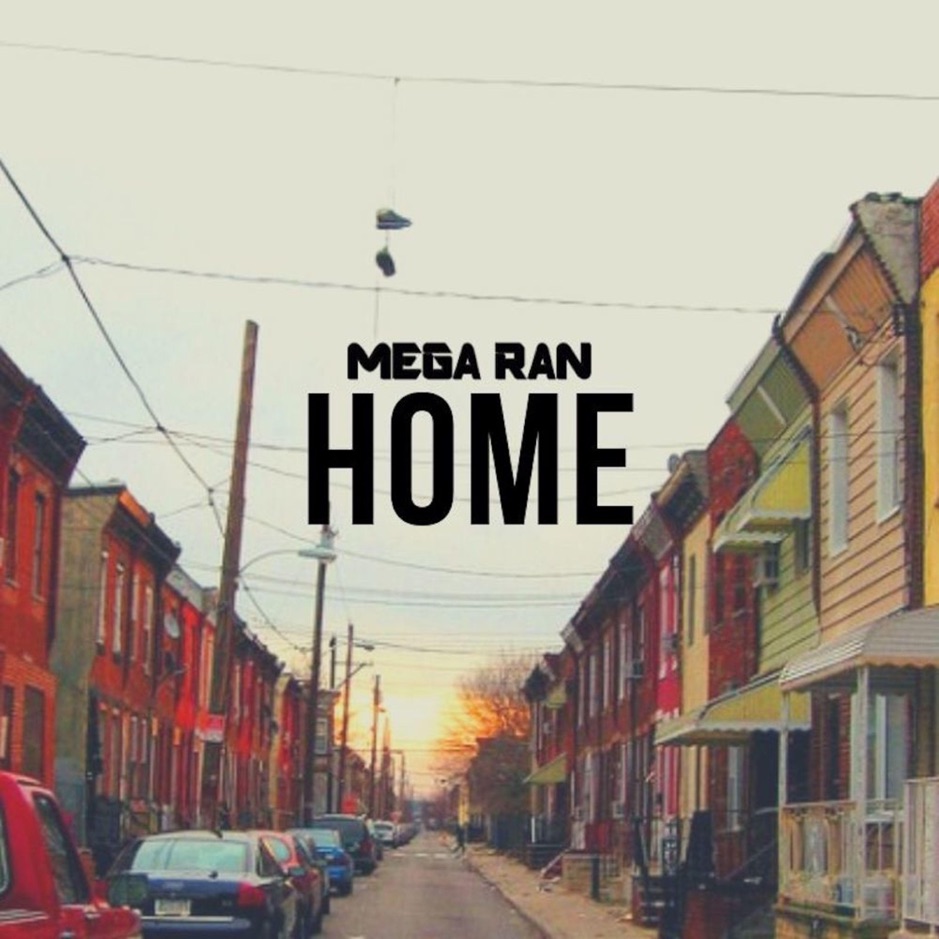 The production is actually pretty dope. I was surprised by how jazzy it was at first. I don’t really remember why. I guess I just wasn’t expecting that sound from a BTS inspired song. The horns that eventually come in are a really nice touch. The instrumental is super upbeat; it sounds kinda like something I’d hear from a Chicago rapper—specifically a SAVEMONEY artist. It sounds like it features Donnie Trumpet. The song as a whole is really dope too though. The content about traveling as an artist is tight. I like both of the verses, and even the sung hook is cool. It’s a dope track. Not one of my favorites, but I enjoyed it a lot. The following track, DNA, is far better in my opinion. The sung hook during the first segment of the song is pretty solid, and Mega Ran fucking slaughtered that first verse. His flow is crazy, especially at the one minute mark. He snapped on that shit, mayne. It’s awesome. During the last half of the track, the song turns into a remix of the second beat from Kendrick Lamar’s DNA. He really snapped on this part too. I just kinda wish he didn’t completely emulate Kendrick’s flow. It would’ve been cooler to hear him put his own spin on it. I mean, he did with the lyrics, but it would’ve been nice for it to have a different cadence, just to differentiate itself a bit more. It’s still one of my favorites on the album though. It’s dope af. Mic Drop is the next standout track for me. The beat is pretty hard, and Mega Ran sounds really badass spitting over it. His flow is awesome, especially around the 0:37 mark. I really like how the song is structured. It’s just one verse over a dope beat. The only thing I wish was different is the length; It feels a bit too short to me. I would’ve happily listened to another minute of him spitting. The song is just under a minute and 40 seconds long as it is. It’s still dope as hell though. The next song I really fuck with is Tips & Tricks. 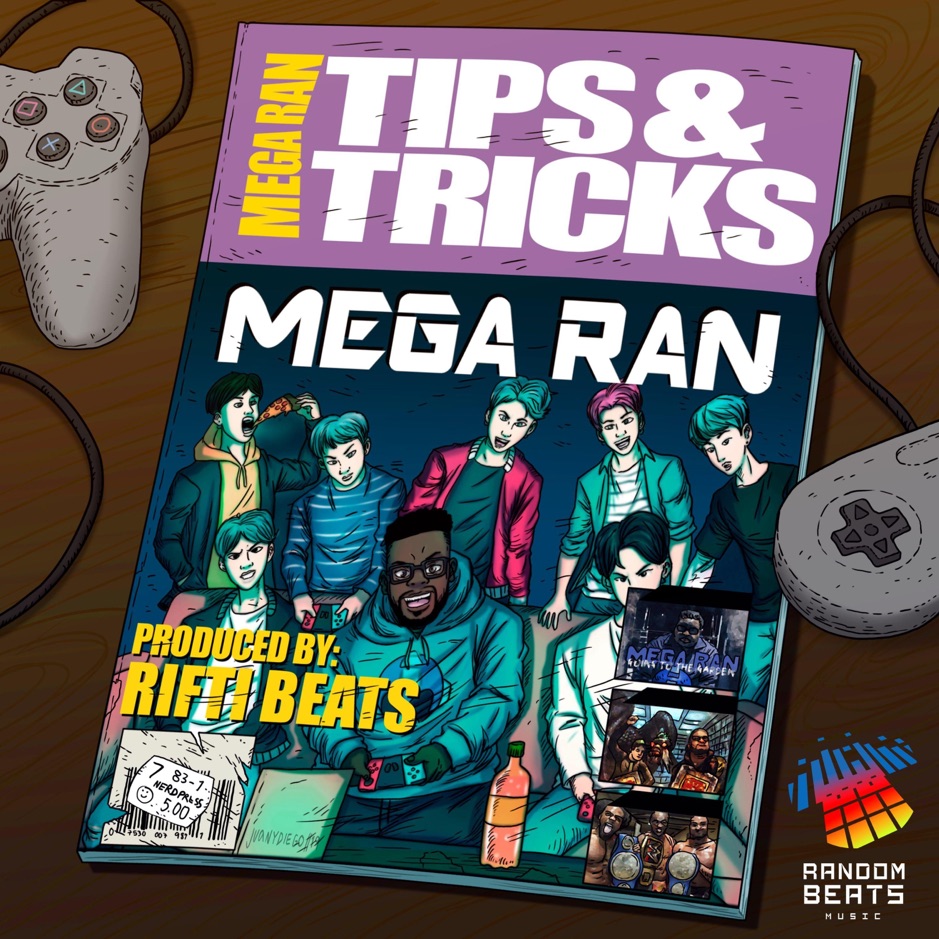 I’m honestly not really crazy about the production, but the actual rapping from Mega Ran is great. As the title implies, the entire song is just him giving advice to up-&-coming musicians. It reminds me of the title track from Tech N9ne’s Sickology 101 album. The two lines I really appreciate the most are when he tells rappers to never rap over their vocals at shows, and when he tells them not to spam their friends on social media. The former teacher in him really jumped out for this song. It’s dope as hell though. I really fuck with it. The last song that I really fuck with just so happens to be my favorite track on the album. I was really excited when I saw that Kill Bill & Rav were featured on Dionysius Cypher, and they did not disappoint at all. 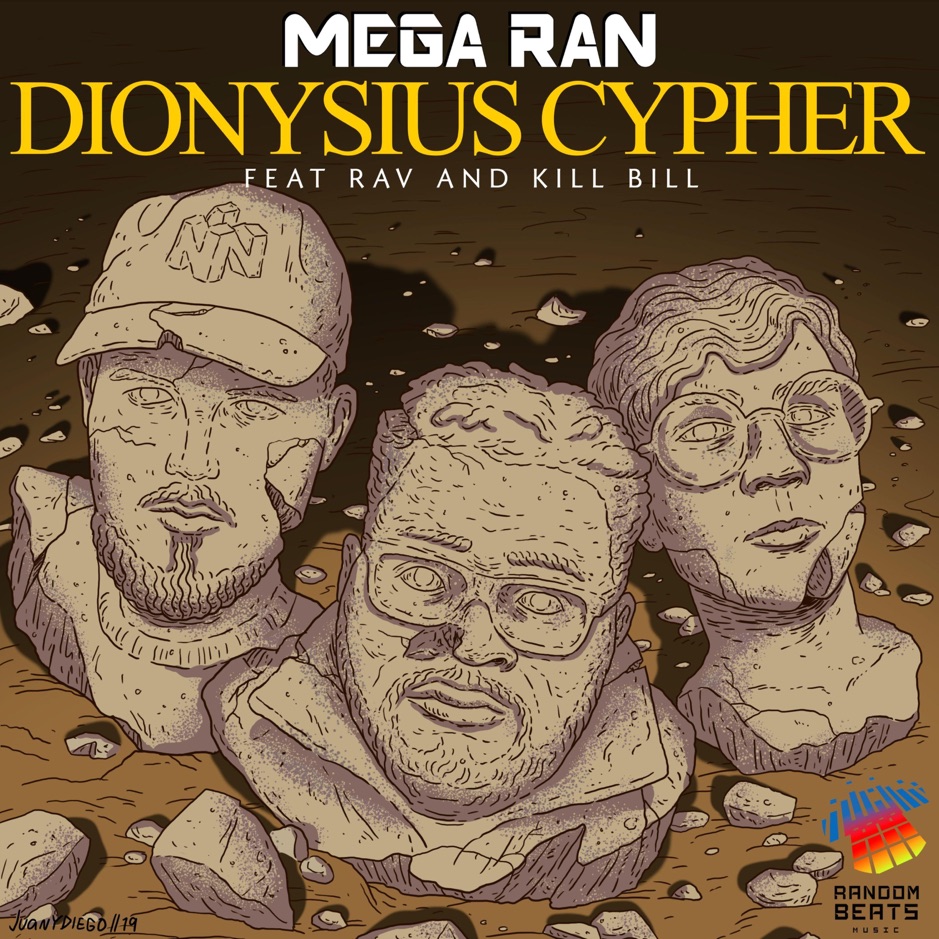 Man, Rav fucking spazzed on that first verse. That shit is amazing. His flow is awesome, and his breath control is straight up insane. It sounds like something he would’ve had to punch in, but the way it’s recorded or edited doesn’t make it seem like he did that at all. It sounds like one take. I’m not sure. He slaughtered that shit though. The way Kill Bill barged in right behind him was awesome too. He also killed his verse.

From out the atoms, all I know is build and destroy
A titan, not a teen no more; you found a different beast, boy

I’ve always really liked both of these dudes, but I was not expecting them to go off like this. Mega Ran of course murdered his verse as well, but I guess it didn’t evoke as extreme of a reaction from me as the two features because I was already expecting greatness from him. I didn’t think Rav & Bill would be wack; I just didn’t think they’d go this hard. This shit is fire though. Again, it’s my favorite track on the album. Those are all the songs I like though. I unfortunately have to talk about the two tracks that I don’t care for now. The first one I’m not really feelin’ is Your Name. 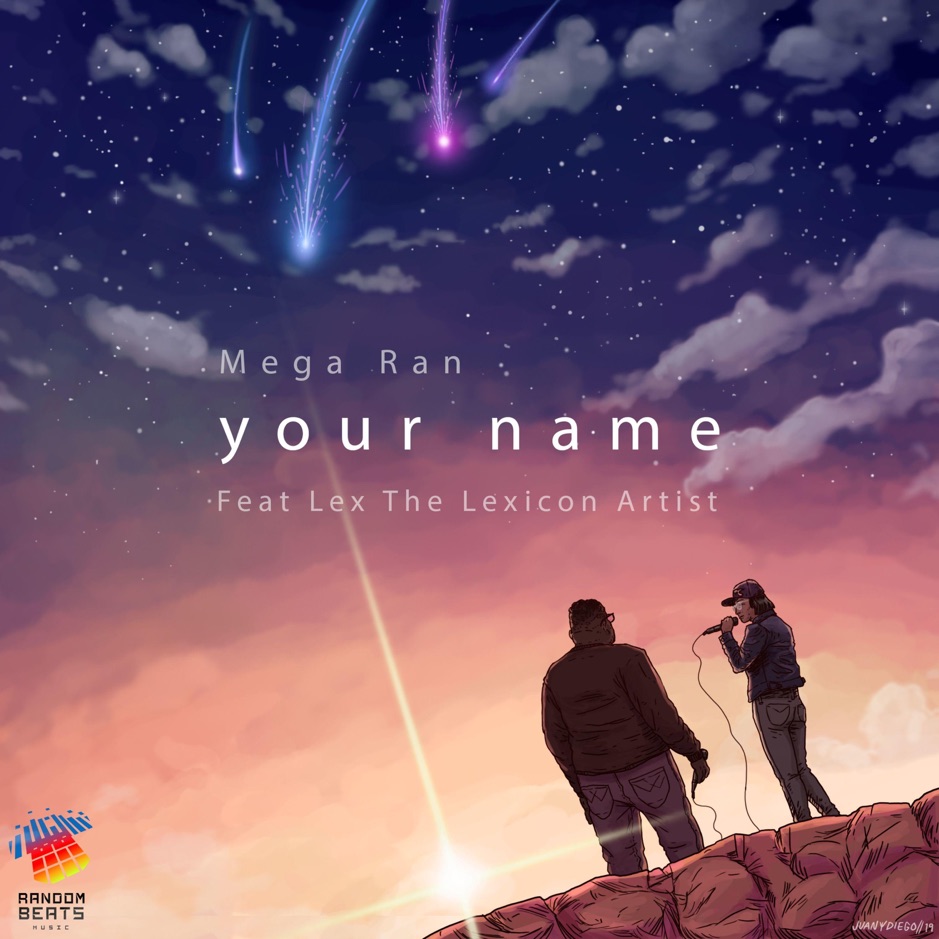 I don’t think it’s a bad song. There are a lot of things that I like about it. I think the sung hook is surprisingly great; Mega Ran’s gotten a lot better at that kinda thing over the years. He didn’t really used to incorporate a lot of melodies in his music without features, and when he did it didn’t usually go over very well. This sounds really good though. It is admittedly a little strange hearing Mega Ran with autotune, but I think he pulled it off. The production from Rifti Beats is kinda cool. It’s just really poppy. In fact, everything about this song is poppy as hell. I think it works until LEX the Lexicon Artist comes in though. The first verse from Mega Ran is really well written. I guess the lyrics in LEX’s verse are solid too. It’s still just her delivery that I can’t get past. She sounds way too nerdy for me. She’s definitely not talentless though. This may seem a little fucked up, but I used GarageBand to edit out her verse because I like everything else about the song. It sounds like one of the poppier tracks that Childish Gambino would’ve made for Because the Internet or Kauai. Kauai is probably a better comparison. It’s an okay track, but the feature ruined it for me unfortunately. The only bad song on this project in my opinion is Infinite Lives. It’s really bad though. This is the only track on the project that’s specifically labeled as a remix, so I guess the other tracks are original Hip Hop songs that just sample BTS tracks. This one is a remix of a song called I’m Fine. I actually think the song is really awful to be honest. The production sounds corny as hell to me. It sounds like an instrumental I’d hear in a shitty single from XV or B.o.B in the early 2010s or maybe even Lasers-era Lupe. Even the rapping from Mega Ran is kinda lame to me honestly. It has more to do with the content than his flow or writing though. However, I have to admit that the XXXTENTACION line made me cringe. I don’t remember exactly what it was, but I think he mentioned something about a girl learning more from X than school. It was something along those lines. Maybe he said it ironically; I don’t effin’ know. The sung hook on this track is really rough too. Same goes for that fast-paced refrain in the middle of the song. For some reason I just imagine a bunch of nerds dressed up as Sonic the Hedgehog dancing to this in a club whenever I listen to it. Also, on top of all of that, the song is way too long. This shit is over four and a half minutes. It should not be. I think it’s wack af honestly. I was not fucking with it even a little bit.

This project is really good. I think as a whole the compilation of Patreon Tracks is a better project, but it’s not like it completely blows this one out of the water. I just think this one is slightly inconsistent given the length. There shouldn’t be any room for error with a 7 track project, and unfortunately there are a couple songs that I’m not fuckin’ with. With that said, there are still some really exceptional moments on this project. I’m really glad I found a way to get my filthy paws on this tape since it was taken off of Bandcamp. I would’ve seriously been missing out if I hadn’t heard that EXO collab. With that said, four of these tracks—including that one—are available as singles on Apple Music, so if you wanna get an idea of how it sounds you can give those a shot. Overall, even though there are some songs I don’t care for, I don’t think there are any consistent flaws that persisted throughout the mixtape. I enjoyed this one quite a bit. I think it’s dope.