I have a lot of shit to work on, but since school started a while ago I really don’t have that much time to do shit, so I’m just finna get a bunch of these EPs done so I can be more consistent. The next 5 reviews will probably all be EPs that I never got a chance to listen to. I’ll hopefully work on the Tech N9ne & Nas marathons as soon as I finish this. That shit’s taking a lot longer than I thought it would… Anyway, I think the first T.I. song I ever heard was Whatever You Like, and I’m sorry, but I think that song is fucking horrible. Nah. I can’t do that shit. So, I thought T.I. was wack for a long time. Once I really got into Hip Hop, I heard Bring ‘Em Out, and that shit was fuckin’ crazy. Yeah, I loved that song, and I had seen people calling him a “legend” just like they do every rapper, so I was like, “Damn. Maybe I should check this motherfucker out…” Eventually he started dropping singles for his album, Trouble Man: Heavy Is The Head. I heard Trap Back Jumpin’, and I was like “Goddamn…” So, yeah. I fuck with T.I. He has some fucking God awful songs like Cruisin’, but I fuck with him a lot of the time. Trouble Man was dope. Paperwork wasn’t great, but it was better than I thought it would be after hearing the single with Iggy. Anyway, I don’t think I’ve heard any of the songs on this project, so I don’t know what to think. Hopefully it’s dope.

Wow… Are you fucking kidding me… I forgot to save this fucking shit??? NOOOOOOOOO! Fuck me. I cannot believe it. I already reviewed this fucking track AND the next one, but it didn’t save. WHY? Fuck. I am so fucking tired of this computer that I’ve been using. I STILL haven’t gotten a proper replacement for my old computer, which is what I used to save all the backups on. That’s also where my entire iTunes library is. I should have a new computer by October 27th (my birthday), but for now I’m stuck on this shit ass Thinkpad tablet that my school got for me. Fuck. Well… Lemme try to remember what I said about this shit the first time… Can’t fuckin’ believe it. Alright. I like the song. It’s not great, but I like it. T.I. sings on the hook and he doesn’t do a very good job, but it isn’t terrible. It has a catchy melody, and the autotune isn’t overused. The verses are pretty basic. He doesn’t say anything that impressive. It’s a standard T.I. song. The beat’s dope too. The song is dope. I fuck with the song. The music video on the other hand isn’t quite as enjoyable. You guys know DC Young Fly? The random guy that does interludes for a bunch of Atlanta artists? He’s in the music video. He sounds just like Chris Tucker. He basically follows T.I. around and says, “Come on, cuz; let’s go to ‘Westside.'” T.I. is like, “nah.” You’re probably wondering how they fit this pointless story into the music video. Well, after every verse, the song will fade out, and we get like 30 seconds of dialogue. Yes, dialogue: everyone’s favorite part of a music video. Why the fuck do musicians do shit like that? Ain’t nobody tryin’ to hear about some lame ass party that we ain’t even invited to. Fuck outta here. The parts of the music video where the song was actually playing were basic as fuck. It’s just T.I. rapping around the city of Atlanta. I wasn’t really feelin’ the music video. The song was cool tho. The hook was catchy — it gets pretty old by the end of the song tho — and the beat was dope. The verses weren’t that great, but it was cool. It’s just a standard T.I. song. It’s not amazing. It’s cool tho. I fuck with it. 4/5

This song isn’t that good. It’s not terrible, but it’s really average. The beat’s cool… There’s no hook, which would be cool if T.I. was actually saying something interesting. He’s not tho. The standout line from this song is “2 things I don’t like: A bitch who can’t shut up, and one who wanna stay the night.” That’s a bad thing by the way. It stands out for all the wrong reasons. The beat is pretty basic. T.I.’s flow is nothing special. There’s really not much to this song. It’s just a basic beat with an underwhelming T.I. verse. The shit he’s saying would have to REALLY resonate with people for anyone to like this song. It most likely doesn’t tho because he isn’t saying anything that hasn’t already been said on thousands of other Hip Hop songs with catchier beats and more impressive flows. This is a boring song. I’m not feelin’ it. This song is wack to me. 2/5

Okay. Now I finally get to listen to a song that I haven’t already heard… I am kinda tired tho. It’s 11:48 PM, and I have school tomorrow. Fuck it. I’ll just finish this tomorrow. Why the fuck is this taking so long? It’s only five tracks long… Whatever. I’ll do it tomorrow. I’m ’bout to save this shit like five times in a row just to make sure it works… Okay, I’m back. I have about 8 minutes to work on this before lunch ends. I’m probably not gonna get anything done to be honest. This beat is kinda ominous, but it’s still a Trap beat. It’s dope af. This hook is basic af, but it’s still really catchy. Tip is goin’ the fuck in. He’s not saying anything super crazy, but it’s hard. His flow is great. This actually kinda reminds me of Young Thug. I’m not sure why tho. He’s not singin’ about smokin’ dick or anything like that, but the sounds he’s makin’ in the background just kinda remind me of him. I fuck with this song, but it’s really not amazing. The lyrics aren’t anything special, but his flow was dope. The beat was cold, and I fuck with the hook too. This is dope to me. I fuck with this. I’m ’bout to check out the music video. Eh… It’s pretty damn basic. He’s just rappin’ in front of the camera in random locations. There’s a little ass kid rapping now. Well, at least there’s no dialogue in this one… I fuck with the song. The song is dope. 4/5 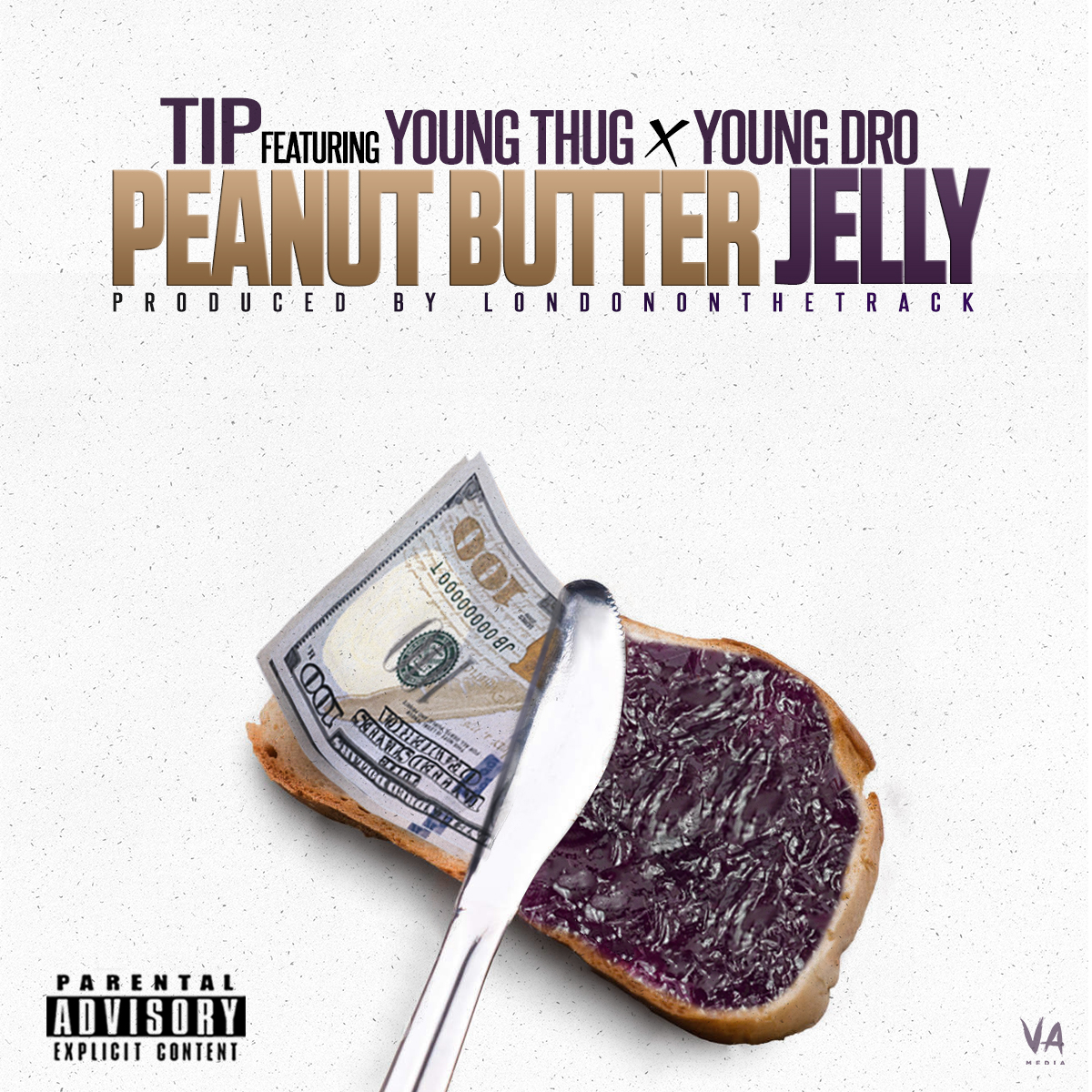 Oh. Okay… I don’t know about fuckin’ Young Dro… He had that song Fuck Dat Bitch a while ago. That one was cool (mostly for the beat), but he just seems really… generic. Maybe he’ll surprise me with a really dope verse. I doubt it tho. Hopefully Young Thug just does the hook. I have low expectations for this shit. HAHAHAHA. Wow. This song is stupid af. I guess the melody is catchy enough, but… Young Thug is singing, “Peanut Butter Jelly. Peanut Butter Jelly. Peanut Butter Jelly. Peanut Butter Jelly.” Fuck… Why do I like this shit? When did I start liking Young Thug? I like this intro. It’s catchy. The beat is dope. Lyrically, this is exactly what one would expect from Young Thug. What the fuck is the peanut butter jelly shit supposed to mean. Is that a metaphor? What does peanut butter jelly symbolize? Ah fuck it. Young Thug probably doesn’t even know what the fuck a metaphor is. Shit, my dumb ass barely knew what it was until last year. T.I.’s verse was average for him. His flow was dope, but lyrically it was nothing special. What the fuck? Young Dro’s goin’ in right now, and the shit he’s saying… It’s… It’s fucking stupid as fuck. Has he always sounded this dumb? I guess I never really payed attention to what he was actually saying before. “If I’m hungry, I eat 100 dollars then shit paper.” Nah. I’m not feelin’ his verse. Especially the way he ended it with the autotune singing. He does not have the voice for shit like that. This hook is actually pretty damn boring. It sounds like a short verse. I’m not feelin’ it. What the hell… Who is… Oh. Apparently MPA Duke has an uncredited feature on this song. He’s on the third verse. It’s not good. Okay, now Young Thug is goin’ in I think. “Keep it goin’: Energizer bunny / I’m so-so with these carrots.” What the fuck does that even mean? He’s average with the carrots? What? “Her titties calcium / My booty calories, and both of ’em squish me.” WHAT? He ended his verse by saying, “I did that shit from my heart / I’m so so so sorry I hurt you, and I see the scar, but you know I’m retarded.” …WHAAAATT????? What the fuck is wrong with this man? Nah. I’m sorry, but I can’t fuck with this. The beat was cool, and T.I.’s verse wasn’t horrible, but it’s all downhill after that. Young Dro, MPA Duke, and Young Thug ALL had wack verses. Especially Young Thug. I have no idea what this song is even about. The hook was kinda entertaining at first, but it gets old real quick. I was so bored whenever the hook came on. Nah. This… This isn’t good. I’m not feelin’ this shit. This shit is wack to me. 2/5

This beat is nothing special. It kinda sucks. I’m not really feelin’ it. T.I’s flow is average. The shit he’s saying is kinda hard, but it’s really not anything we haven’t heard from T.I. If you like the typical gangsta T.I. track and don’t mind this basic beat you’ll probably like this. The hook is kinda cool. Nothing special, but I kinda fuck with it for some reason. I don’t know why. The second verse is a lot more entertaining than the first one. I think this beat might be growing on me. I don’t know why. This really isn’t that great of a song, but it’s not horrible. It’s just average to me. I’m not really fuckin’ with it like that, but I probably wouldn’t mind too much if this was on the radio. I don’t know. I won’t be downloading this shit, but it’s not that bad. It’s average. The music video is basic af. It’s just in black and white. It’s an alright song. I guess. 3/5

This is an alright project. I only really liked 2 songs. If you’re a fan of T.I. then I guess this is worth checking out. You’d probably like it. I’m just gonna assume that these are the leftovers that didn’t make the album because they weren’t dope enough. The beats were average, and… Well… Almost everything about this project is average. It’s just a collection of 5 typical T.I. songs. I liked some of them, but this is pretty forgettable to be honest. It’s not horrible tho. It’s an average EP. Hopefully his actual album is more entertaining.